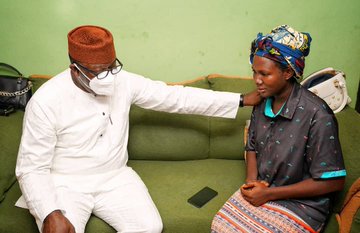 Olawunmi was among seven persons onboard the aircraft. There was no survivor in the crash.

Mr Fayemi shared photos on Twitter from his visit to the bereaved family.

“Spent this morning with Mrs Omolola Olawunmi, wife of our son from Ogotun Ekiti, Flight Sergeant Olasunkanmi Olawunmi who died in the Air Force plane crash on Sunday. May the soul of the dear departed rest in peace.”

The NAF spokesman also said the officers were “scheduled to conduct surveillance missions over Niger State and its environs in connection with the concerted efforts to secure the release of the students/staff abducted from the Government Science College Kagara, Niger State.” POWER RESTORED IN SOME PARTS OF ABUJA AS ELECTRICITY WORKERS CALLED OFF STRIKE.