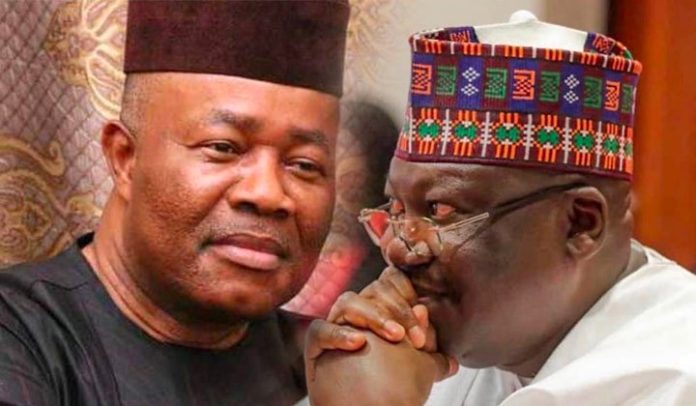 The All Progressives Congress may not have candidates for the Yobe North and Akwa Ibom North West Senatorial Districts in the 2023 elections because of controversies over the primaries on Friday.

But a National Commissioner at the Independent National Electoral Commission, who did not want to be quoted because of the sensitive nature of the matter, said on Friday that both Lawan and Bashir Machina might have lost out for the senatorial seat of Yobe North in the 2023 election.

“Both Yobe North and Akwa Ibom North are blank. What we have is Mohammed Bomoi for Yobe South and Ibrahim Geidam for Yobe East. There is no name for the Yobe North for the APC”, the source said.

According to him, the commission did not publish any candidate for APC in the Akwa Ibom North West in the next year election.

‘’In Akwa Ibom State, apart from North West that is blank even though that man (DIG Udom Ekpoudom) won, in the North East and South Senatorial Districts, and the House of Assembly, they brought names of people who didn’t go through primaries monitored by INEC,” the source said.

However, Certified True Copy of INEC’s report from the May 28, 2022, primary election trending online on Friday revealed that Machina polled 289 votes out of 300 delegates to emerge winner for the Yobe North Senatorial District, even though the APC submitted the name of Lawan as the candidate of the party for the Senatorial District.

The document was reportedly certified by the commission on June 23, 2022.

Several calls, SMS and WhatsApp messages sent to INEC National Electoral Commissioner and Chairman of its Information and Voter Education Committee, Festus Okoye, and Chief Press Secretary to the commission’s chairman, Rotimi Oyekanmi, on the matter were not answered.

The National Chairman of the APC, Abdullahi Adamu, had warned of severe sanctions if Machina refused to relinquish his ticket to the Senate President, Ahmad Lawan.

He had claimed that the party was supreme and that it reserved the right to decide who would get its ticket in any election.

But Machina, a Third Republic member of the House of Representatives, rejected the substitution of his name in the list sent to INEC.

He noted that the nominated candidates themselves, who had accepted to be running mates to the presidential candidates, would stand for election come 2023, except they choose not to do so.

According to him, no one can force any of them to give up their seats for another candidate as the concept of ‘placeholders’ is alien to the electoral system.

The presidential candidate of the ruling All Progressives Congress, Bola Tinubu, had submitted the name of Ibrahim Kabiru Masari, as his running mate, stating that Masari would be replaced with a substantive candidate when a proper decision was reached before the window given by INEC closes.

This was the same for the presidential candidate of the Labour Party, Peter Obi, who chose his campaign Director-General, Dr Doyin Okupe, as his running mate for now.

Okupe, in an interview, said he was standing in for the substantive candidate who would be made known to the public in due time.

Reacting, Okoye, in an interview with Channels TV on Friday, Okoye said, a vice presidential candidate could only be replaced if he died or chose to withdraw from the race.