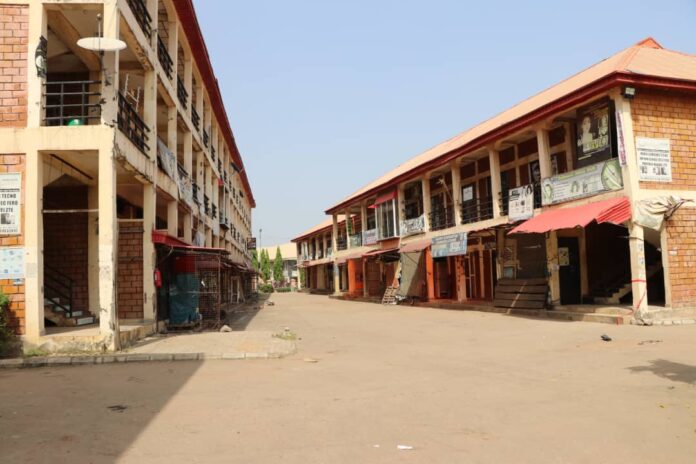 Minister of the Federal Capital Territory,  Malam Muhammad Musa Bello, has approved the reopening of the Olajumoke Akinjide Shopping Arcade, Dutse-Alhaji, Abuja, four days after the complex was shut down for gross violation of land use act.

Recall that the Federal Capital Territory Administration had on Monday, closed down the market indefinitely, over what it described as extreme contraventions which include offensive refuse collection and disposal, clogging of drainages, indiscriminate construction of attachment at different corners, among several other unwholesome activities.

The Senior Special Assistant to FCT Minister on Monitoring, Inspection and Enforcement, Comrade Ikharo Attah, who led a team yesterday, to inspect the level of compliance, announced that business will resume on Friday but not without a promise to return to the market whenever reports of further violation is discovered.

Attah who noticed some bleeding points, advised shop owners to prevent hawkers and petty traders from erecting attachment around their shops.

He also warned the market management to desist from allocating parts of staircases and other corners that affects free movement within the market.

A few minutes ago, the Minister of the FCTA, Malam Muhammad Musa Bello, directed that upon the intensive cleanup by the traders and management and every stakeholder here, that the Jumoke Shopping complex be reopened with effect from Friday morning that, the traders can commence trading  as far as he is concerned, the cleanup is satisfactory enough to ensure the safety and compliance to the AEPB as well as the urban and regional planning roles and that the market be open for business.

The minister wishes the traders well in what they will be doing during the booming December season.

Attah who said the reopening was delayed because of some contraventions around the staircases and illegalities hidden there, but now that all has been cleared and the minister has directed that the market be reopened, I expect that the traders should be appreciative of what we are all doing together here.

The market is clean and we hope its kept this way so that buyers can freely drive in and buy what they want without hindrance and the traders can also sell without glitches so that they will enjoy the forthcoming booming Christmas, sallah and Easter season. It’s a tough time for them and I believe they wouldn’t allow such contraventions repeat itself again.”

Some of the shop owners who expressed excitement over the development, commended the FCTA for its intervention with a pledge to ensure the complex retains its original building plans.

A cosmetic dealer at the market, Alhaji Nura Umar while appreciating the FCTA for heeding their appeal to reopen the market said, “Initially we felt bad when the market was first shut down, but at the end of the day we are the first beneficiaries of this clean and sane environment.

The Vice Chairman of the market, Mrs Christiana Eze, who blamed the market managers for allocating every available corner and space to petty traders however assured that going forward the traders will own the market and protect it from all forms of contraventions.

“The truth is that the management are the cause of all these problems. They are the ones who allocate space for as little as N5000 or N10000 not minding the obstructions it will cause to the market.”

Reacting, the manager of the shopping complex, Mr Ezekiel Abiodun Olowookere promise that the environment will remain clean at all times.

“Yes we are very happy that the market will be opened tomorrow. We have been cleaning the market for 5 days now to make sure it looks very fine and now we are happy that everything looks good and the minister has allowed us to reopen.”

The FCTA while shutting down the market on Monday, had promised to reopen it when it’s convinced the traders and operators have done the needful in cleaning and maintaining their premises.