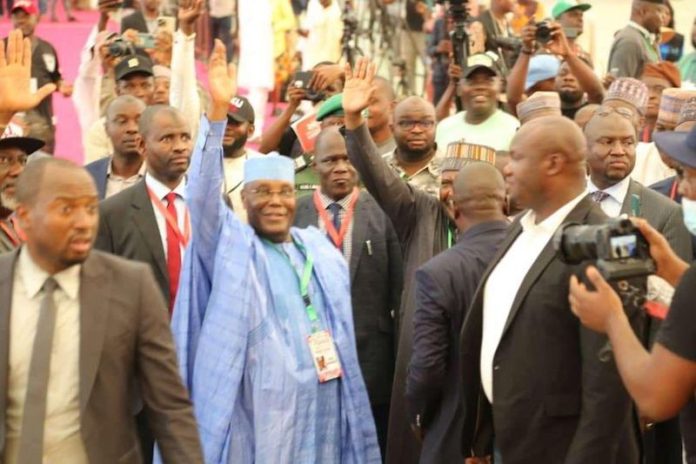 Mr Abubakar defeated 12 other candidates in a keenly contested presidential primary held at the Moshood Abiola Stadium in Abuja on Saturday.

Of the 767 accredited ballots at the election, he polled 371 votes while his closest challenger, Governor of Rivers State, Nyesom Wike, came second with 237 votes.

The only female in the race, Oliver Diana, and another contestant, Sam Ohuabunwa, scored one vote each.

The other contestants – including former Governor Ayodele Fayose and Magazine Publisher, Dele Momodu got zero-votes.

While Atiku’s victory at the primary is his second successive attempt, it also marked his fifth shot at the presidency. He has had other unsuccessful contests for the seat under both the All Progressives Congress (APC) and his current party, the PDP.

The Adamawa-born politician also secured the ticket of the PDP in 2019 but lost at the general elections to the incumbent, President Muhammadu Buhari of the APC.

The former vice-president will again face whoever emerges from the forthcoming presidential primaries of the APC.

Before voting commenced at the primary, a strong contender for the ticket, Governor Aminu Tambuwal of Sokoto, stepped down from the race and directed his supporters to vote for Atiku.

Some political analysts believe it was Mr Tambuwal’s withdrawal from the race that tilted the race in favour of the former vice president.

The Sokoto governor, who also contested for the ticket ahead of the 2019 election, had campaigned aggressively and was widely rated among the top contenders for the ticket.

Party insiders said he had especially locked down votes from the North-west geopolitical zone which has the highest number of delegates nationwide.

But for his withdrawal, he would have divided the votes of the north and possibly opened the way for Mr Wike to clinch the ticket.

In his acceptance speech after he was declared winner, Atiku described his emergence as the making of another history.

He said the election is the freest and fairest election in the history of the party.

Promising to unify the country, Atiku accused the APC-led government of fostering disunity among Nigerians across ethnic and religious borderlines.

“I also pledged to confront economic problems which were compounded by the APC government,” he said.

Atiku called on his fellow contestants to join forces with him and promised to cooperate with them in building the country.