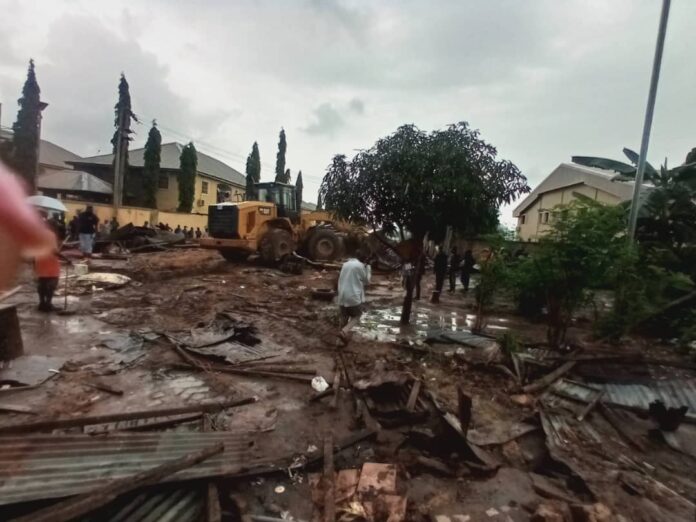 The Federal Capital Territory Administration, FCTA, on Wednesday warned property owners against encouraging barchers, containers and shanties in front or attached to their fence.

Senior Special Assistant to FCT Minister on Monitoring, Inspection and Enforcement, Ikharo Attah, stated this while removing illegal structures in Kubwa and Dutse in Abuja.

He condemned the people that are building under extreme high tension transmission wires, saying, ‘it is hazardous to their health and dangerous incase of accident’.

Attah who condemned the development and said, it is unacceptable that beautiful neighborhood are littered with shanties, containers and batchers had also tasked the residents to discourage this so that the areas be free from criminals.

To ensure that the streets are free,. We will keep coming to remove the barchers and shanties. And if they refuse to stop we will serve them abatement notice and take them to court. It is unacceptable that you have already rented your house and you are not satisfied and start renting the front of your house for barchers, containers and shanties”.

On building on high tension wire, he lamented, “It unspeakable, it is extremely high tension transmission now, you just go under you build beer parlour, build whatever, the radiation alone is hazardous to your health, the risk factor alone, should there be any accident is frightening, because it is death outright. We have block industries, restaurant, game center, etc all under high tension wire.

“People who don’t know will think we are wicked but one-day they will thank us because we are saving their lives”.

“Most of the people living there, don’t have a known address and crimes are mostly perpetrated by them. We encourage neighborhood association not to allow them to foster in their areas”.