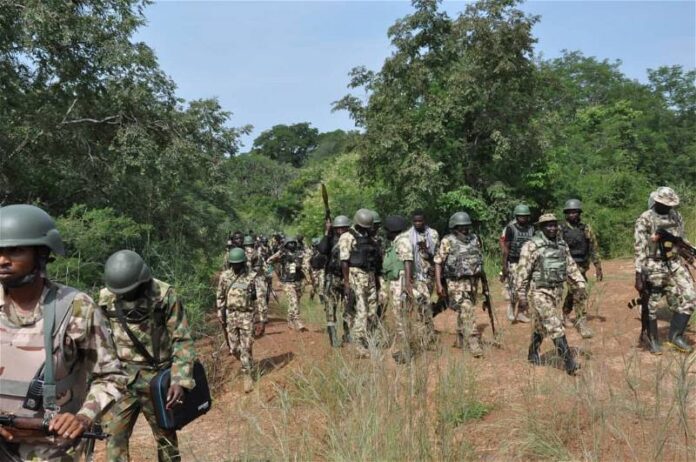 Soldiers of the Guards Brigade, Nigerian army have continued to raided forests in the Federal Capital Territory(FCT), Niger, Kogi and Kaduna states in search of terrorists, bandits, kidnappers taking refuge their.

The operation followed the ambush of soldiers by terrorists in Bwari Area Council last Sunday.
The operations which  yielded positive results with the arrest of several terrorists, destruction of their camps and recovery of arms, weapons, ammunitions and other logistics.

A security source said that soldiers have taken the fight to the terrorists and would not relent until they are decimated. The source who does not want his name to be mentioned, said the terrorists who are mostly foreigners use power bikes to operate.

So far, the source said a good number of the terrorists have been arrested and have made  useful statements to intelligence officers.
It was gathered that the suspect arrested revealed on their members who are Okada riders, water vendors, wheelbarrow pushers, petty traders, mobile tailors, shoe Coblers among other informants to obtain information on troops movement, security presence among others before carrying out attacks.

When contacted on the operations to flush out the criminals from the forests, the director army public relations Brigadier General Onyema Nwachukwu, did not pick his call.