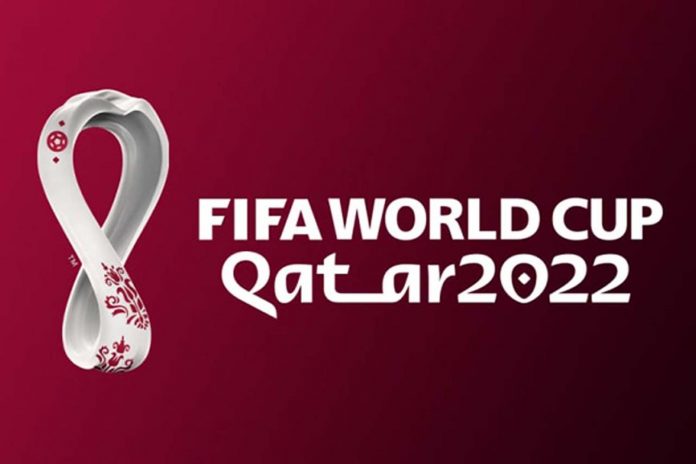 World football governing body, FIFA has unveiled the official emblem for the 2022 FIFA World Cup to be hosted by Qatar in 2020

The Arab country is getting set to give the world a taste of something almost entirely different as the countdown draws closer.
The official unveiling took place in Qatar’s capital, Doha, at 20:22 local time on Tuesday, with thousands of spectators witnessing the synchronised projection of the emblem onto a number of the country’s most iconic buildings, including Burj Doha, Katara Cultural Village Amphitheatre, Ministry of Interior, Souq Waqif and Msheireb and Al Zubarah Fort, a UNESCO World Heritage site.

According to a statement on FIFA website, the emblem’s design embodies the vision of an event that connects and engages the entire world, while also featuring striking elements of local and regional Arab culture and allusions to the beautiful game.
“The swooping curves of the emblem represent the undulations of desert dunes and the unbroken loop depicts both the number eight – a reminder of the eight astonishing stadiums that will host matches – and the infinity symbol, reflecting the interconnected nature of the event.

“Besides echoing the shape of the iconic FIFA World Cup Trophy, the emblem’s central form takes inspiration from a traditional woollen shawl. During winter months, shawls are worn around the world and in the Arab and Gulf region in particular by a variety of people and in various styles.
Two stadiums are already in completion stage, while FIFA said the remaining six venues are scheduled to be completed before the end of 2020, including the spectacular fanar lantern‑inspired Lusail Stadium, which will host the opening match on 21 November, as well as the final on 18 December 2022.

Cristiano Ronaldo Has Now Scored Against All Serie A Teams