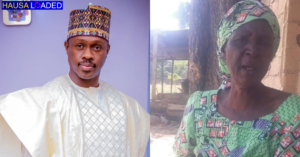 The Baba Tambaya controversy has exposed a lot of things about Kanywood, many of them we already knew or suspected and a few we are just finding out.

First we discovered that many actrors are unwittingly being exploited by some filmmakers.

It is also revealed that some big names in Kannywood could be guilty of what the old woman said from their reactions.

Also that some filmmakers don’t care about their crew’s welfare because they allow them to be cheated by whoever is in charge of the payment wether internationally or otherwise.

It is also evidently clear that that Kanywood is not a unified body with solid leadership, it is also devoid a single spokesman since anyone can come out and spew either sense or trash depending on what their interest is.

We can tell that many actors are in need of enlightenment about their rights and privileges for clearly some have never signed anything like a film contract, and that is why they can comfortably insult the old lady who innocently blew the whistle, instead of seeing it as an opportunity to assert their rights and demand for more pay.

It is also clear that we have a long way to go, for Instead of the ‘Me too’ movement that happened in Hollywood after powerful movie producer Harvey Weinstein was exposed for sexually harassing many female actors which led to his arrest, trial and conviction we are witnessing the reverse where potential victims are defending their potential abusers.

Lastly and the most shocking of all was the revelation that instead of getting paid some actors actually do pay in order to appear in films! Yet we still wonder why our movies aren’t on Netflix!

The industry need to take themselves serious and address all those important issues in other to be the industry we would all be proud.