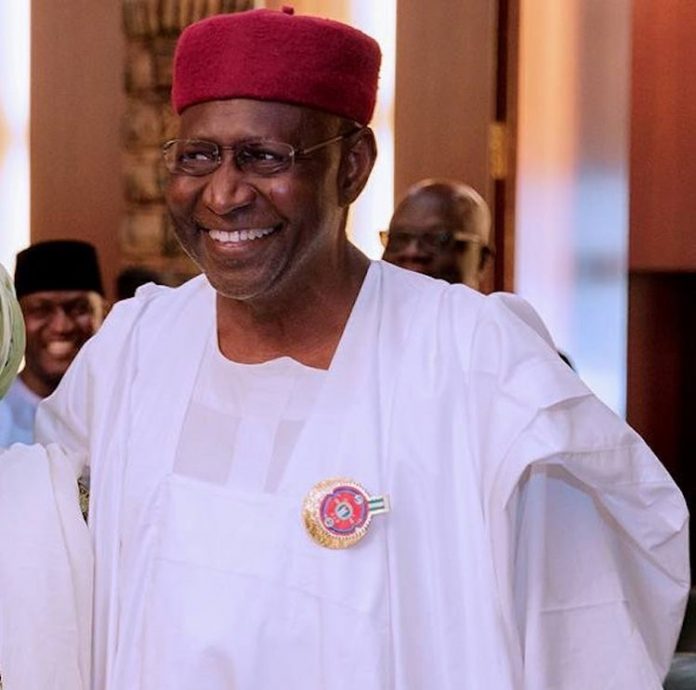 All men must serve and all men must die. “Each man’s death diminishes me, for I am involved in mankind, therefore send not to know for whom the bell tolls – it tolls for thee” __ famous words from John Donne from the 1624 meditation 17, (Devotions upon emergent occasions). The Bible’s Romans 8:13 says, “If we live, we live for the Lord, and if we die, we die for the Lord. So whether we live or die, we belong to the Lord. The Qur’an’s Al’Ankabut 29:57 says, “every soul must taste death, and in the end, unto us shall all be brought back”. Abba Kyari, a notoriously popular name since he was appointed PMB’s Chief Of Staff, has passed on to the great beyond, put to the ground as soon as he died, in one piece of cloth, at Gudu cemetery; according to Islamic rights – contrary to some opinion that he had passed away atleast two weeks before. The most recalcitrant and vociferous voices of opposition and criticism towards the Buhari administration were effusive with kind words of compassion and attestation to valor and loyalty. Femi Fani Kayode and Reno Omokri both mourned this colossal loss, and were full of eulogies for the vastly experienced and knowledgeable Kyari.

Even in death, the Nigerian media space was flled with inaccurate reporting or representation of the barest information or data about Abba Kyari. It was widely reported that he died at 80, while infact, Kyari was 67 until a few days ago. They never knew him and never cared to. They were stoically out to crucify and vilify his character. They had long assassinated his personality one too many times, and buried him before now. What was left was “a carcass” of Nigeria’s problem, and only two days ago, the Lord himself, Almighty and Eternal and All, rescued what was left of Kyari, back to the great beyond; where we all are destined for. The shylocks of the corridors of power contended with a loyal and resolute gatekeeper who was incorruptible to their ploys and machinations; and as soon as that had dawned, Abba Kyari was toast! A hausa proverb says, “A dead body is feared because of its silence”; and because he never muttered a word throughout their festival of calumny, it made him all the more awesome and them – worrisome.

Abba’s pedigree was comparable to non of his peers which just explains why the hatred, and why the antagonism. He is a son to the Emir of Bama and heir to the throne, which he passed off to one of his uncles. He had a Bachelor of Arts Degree in Sociology from Warwick and another Bachelor of Arts Degree in Law from Cambridge. He possessed a Masters Degree in Law from the same Cambridge, and attended the International  Institute for Management Development at Lausanne Switzerland. He was also a product of the Management Development Program at Harvard Business School. Rising through various positions and cadres in Law firms, in Business Institutions, and as Editor of The Democrat. He rose to become the MD of UBA,and subsequently a board member of ExxonMobil. Buhari said it all in his eulogy of the man Abba. “He possessed the sharpest legal and organisational mind, and he was the very best of us all, and was made of the stuff that made Nigeria great. He strove quietly without any quest for publicity or personal gain, to implement my agenda”. Her Excellency, Catriona Laing CB, British High Commissioner to Nigeria, in her condolence letter, said of Abba, that – “He was highly respected in the International Community as a passionate champion of Nigeria’s interests. I engaged regularly with Abba Kyari in his capacity as Chief of Staff to Nigeria’s President, and I greatly value our open, honest and frank dialogue. He brought spirit, tenacity, and a tireless commitment to his beloved Nigeria”.

In 1995, I suffered a sprain in my back and I was ‘ferried’ regularly by Uncle Abba to The Lagoon Hospital in Lagos, and I was well attended to by Professor, Dr. Elebute who was one of the best medical minds at the time. Uncle Abba, along with his wife Anty Kulu, who is my mum’s younger sister, always encouraged me to be tops of my class, and they never ceased to shower me with gifts and care when I was in school. I in turn, never failed them in topping class. When he became Chief of Staff, I knew to veer off his radar as I was sure that I would definitely be ready material for whoever wanted to once again launch media calumny against him. I knew Abba would shy away from being shaded as nepotic and I also decided to save him the trouble of thronging his residence or his office.

Since 2015 when he became Chief, till he died, I never met him eye to eye. We exchanged text messages no more than twice, and spoke on the phone not more than thrice. They were condolence messages, or whenever he fell ill. When it was said that he had corona, I called my aunt and she hooked me up with him on the phone. He always called me Babatalba, just the way he addressed my late dad, Ibrahim Tahir, who had practically raised Uncle Abba, as his son. It was so humorous when we spoke and we laughed really hard, partly in the joy of speaking to each other after such a long time, and wholly because he was hale and hearty. Even if he was infected, he was not ill. I was jolly happy and felt that he was going to be fine. Alas he would be fine in the hands of the Lord. Abba was never worldly. He was always dorned in a cheaply white cloth with the same red caps called Dara – and that’s why he was often referred to as ‘mai jan hula’. Just like the red berrets of the Nigerian Army, Abba was Buhari’s red berret. The Senior Special Assistant to Mr. President on Social Intervention Programmes, Ismail Ahmed, in his eulogy of Uncle Abba, wrote, “We blamed you for everything and yet you took it in like a champ. Your stoic silence and loyalty to your country and countrymen was obvious. You served your boss well.

PMB has dodged many bullets as the C-in-C, wearing a stealthy armour – in the services, loyalty, knowledge, vastness and International acclaim of his COS, Mallam Abba, who lapped it all up. The vacuum is huge, painful and a colossal loss. May he rest in peace and may Allah grant him paradise. In islamic beliefs, one is a martyr if he dies on a Friday, and so is one, if he dies from an affliction from a pandemic. Curiously, Abba had both. Our prayers are with him God willing. Now that he has left the stage, the keys to the Eldorado-Nigeria have been released and left to Nigeria and Nigerians to pick them and open up all those things that Abba has ‘locked up’; afterall, he can’t take them with him in his tiny grave for one. Nigeria is free and will be free I guess, according to his naysayers. 10 year-old issues like infrastructure-deficits, terrorism, banditry, rape, baby factories, cultism, rituals, almajiris, corruption, fake news and so on will be gone by Monday – for the myth of Abba is gone.