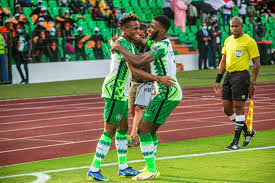 The super eagles of Nigeria are through to the last-  16 at the Africa cup of Nations this evening. the first goal was attained by Samuel Chukwueze who struck after just three minutes at the start of the game.

The second one was recorded by Taiwo Awoniyi and the third was added minutes later by Moses Simon. From all ends hopes are rising that Nigeria can add to their three AFCON tittles, the last which was won in south Africa in 2013.

The eagles who beat the pharaoh of Egypt at the start of the competition 1-0.