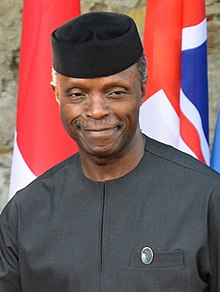 The Vice President, Professor Yemi Osinbajo is currently undergoing a surgical procedure at the hospital.

“Professor Yemi Osinbajo is in the hospital today for a surgical procedure on account of recurrent pain in the leg possibly sustained from an injury while playing squash. His doctors would give an update of the treatment later today”.

Osinbajo who celebrated his wife, Dolapo Osinbajo, who clocked 55 on Saturday via his social media pages.

SPEECH BY RT HON. YAKUBU DOGARA, CFR ON THE IDPs QUESTION AS A STAIN ON NIGERIA’S CONSCIENCE DELIVERED AT THE 7TH HENNA BALL AWARDS...