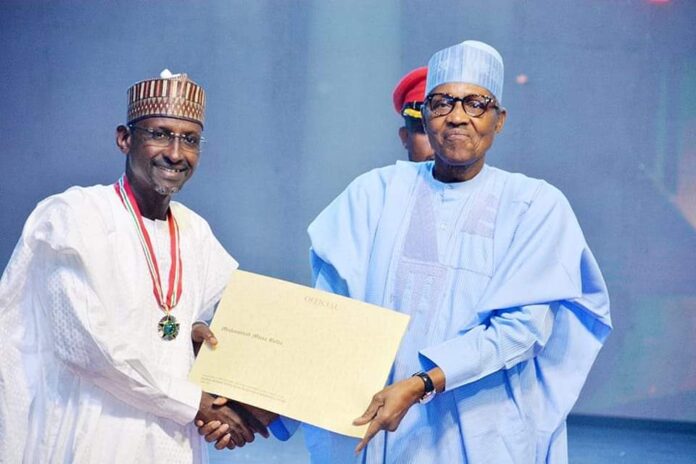 The conferment Commander of the Order of Niger (CON) on the Minister of the Federal Capital Territory (FCT), Mallam Muhammad Musa Bello, has sparked off jubilation among the Staff of the FCT Administration and other stakeholders in the Territory.

It was recalled that the FCT Minister is amongst the 449 Nigerians, who received the 2022 National Honours Award, by his Excellency Muhammadu Buhari.

The  Permanent Secretary FCT,Olusade Adesola, who described the award as unprecedented,said it is well deserved honour, the Minister has been a very dedicated, consistent and committed administrator.

Adesola explained that his passion for the FCT is unparalleled, as he discharges his mandate with great zeal.

He adds: “He comes office early, he discharges his assignment and looks at every nooks and cranny. When he talks of Abuja, he knows it like a pack of card.

“For all these services to be accorded the recognition is indeed very appreciated.

Similarly, the immediate past Chairman, Abuja Municipal Area Council (AMAC), Adamu Abdullahi Candido, said the FCT Minister is a silent achiever, whose works are glaring for all to attest to.

Candido, who is currently the FCTA Mandate Secretary for Transport, in his words” the Minister of the Federal Capital Territory (FCT) is a silent achiever. He is one individual who have an opportunity, and had never been so pretentious. He has done so much, and only eyes can see and believe”.

Not left out, the Senior Special Assistant to the Minister on Monitoring, Inspection and Enforcement, Comrade Ikharo Attah, described the conferment as a recognition for astute and selfless leadership in public service, which the Minister epitomises.

Attah added that the award did come as a surprised to him, given the Minister’s uncommon leadership style and commitment to selfless service to the country.